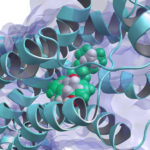 myPresto is a program suite composed of several molecular simulations for drug development.

This page is for downloading free program myPresto newest version. 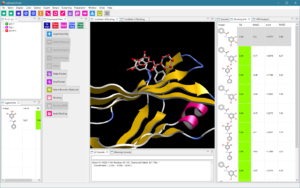 A graphic user interface (GUI) program for myPresto 5. It can be used on Windows, MAC and Linux.
Last updated on October 2, 2020

A file translation program. Hgene can add/remove hydrogen atoms to/from a general compound. It can generate a dominant ion form of chemical compound in water/vacuum.
Last update on February 22, 2020

This engine is for generating molecular topologies of biological macromolecules for usage in other programs in myPresto, and it is an extended verion of the previous tplgene. A new option to parse and ouput PDBx/mmCIF format files is available.
Last update on January 18, 2018

This engine is for generating molecular topology of a target ligand (chemical compound) for usage in other programs in myPresto.
Last update on January 12, 2018

A tool program for modeling a system including transmembrane protein, lipid bilayer membrane, water, and ions.
Last updated on February 27, 2018

In this method, free energy profiles are obtained from the analysis of many MD trajectories which are obtained with MD calculations with umbrella potentials.
Last updated on March 11, 2018

(included in ToolsYYMMDD.tar.gz)
A conformer generator for compound. Confgene can generate various conformers of compound.
Last update on January 18, 2018

(included in ToolsYYMMDD.tar.gz)
A conformer generator for cyclic part of compound.
Last update on January 18, 2018

This is an open database, containing the three-dimensional (3D) molecular structures and atomic charges of chemical compounds, which are available from industries. Some are collected from the KEGG DRUG database.
If you want LigandBox, please specify “Your Affiliation” and apply with Contact. We will inform you of the download site of LigandBox by email.

A protein-compound docking program for in-silico (virtual) drug screening and prediction of protein-ligand complex structure. Sievgene is a fast flexible docking program. On average, it can dock one compound to a target in 1 seconds with high accuracy (56% complex structures satisfy RMSD < 2A in a self-docking test) on usual PC. It is designed for PC grid computing.
Fukunishi, Y., Mikami, Y., Nakamura, H. (2005) J. Mol. Graph. Model. 24, 34-45
Last update on March 20, 2018

sievgene_M is a modified version of sievgene, which can be also executed on a system with Intel Xeon Phi. Inte Xeon Phi is a new CPU including more than 50 cores.
Last update on January 20, 2018

A protein-compound docking program for prediction of protein-ligand complex structure / drug screening with using a given known-ligand docking pose. This software performs a ligand docking and overlapping the ligand onto the given known-ligand structure given by the user at the same time. It is a combination of docking and similarity search.
Fukunishi, Y., Nakamura, H. (2012) Pharmaceuticals 5, 1332-1345
Last update on January 11, 2018

(included in screening_packYYMMDD.tar.gz)
A ligand-based drug screening program based on protein-compound affinity matrix. selectDSI can perform the docking score index (DSI) method and machine-learning DSI (ML-DSI) method. If active compounds of your target are known, a machine-learning DSI can show high hit ratio.
Y. Fukunishi, Y. Mikami, K. Takedomi, M. Yamanouchi, H. Shima, H. Nakamura. “Classification of chemical compounds by protein-compound docking for use in designing a focused library”, Journal of Medicinal Chemistry, 49, 523-533 (2006)
Y. Fukunishi, S. Hojo, H.Nakamura, “An efficient in silico screening method based on the protein-compound affinity matrix and its application to the design of a focused library for cytochrome P450 (CYP) ligands.”, Journal of chemical information and modeling, 46, 2610-22 (2006)
Last update on January 12, 2018

Our 3D chemical compound database consists of more than 10 millions compounds. Also, we prepared several sets of protein-compound affinity matrix generated by sievgene. The matrix is a matrix of docking scores of 182 proteins vs. 2 millions compounds. This database is essential to use selectMTS and selectDSI. Please contact Yoshifumi Fukunishi, phD (y-fukunishi * aist. go. jp: is the e-mail address. please replace * by @, and remove the space “ “.) to get these databases. The size of these databases is beyond the limit of FTP download, so that we distribute these databases by hard disk drive.

A ligand-based drug screening program based on chemical compound structure comparison. A substructure search method based on the molecular structure by using the Ullman’s method.
Last update on January 12, 2018

SyntheticAccessibility: Prediction of the synthetic accessibility of given compounds.

This tool predicts the synthetic accessibility (SA) of given compounds based on the complexity, number of chiral centers and symmetry of the compound. The SA is shown as real number from 0 (easy) to 10 (difficult).
Y. Fukunishi, T. Kurosawa, Y. Mikami, H. Nakamura. Prediction of Synthetic Accessibility Based on Commercially Available Compound Databases. Journal of Chemical Information and Modeling. (2014), 54 (12), 3259-3267.
Last updated on January 11, 2018

LibMyPresto: Package of the library programs for parsing and writing PDBx/mmCIF and PDB formatted files.

Library programs to parse and write either PDBx/mmCIF or PDB formatted files, with the users programs in C, f77 and f90 languages.
Last updated on January 19, 2018